Sep 27, 2018  League of Geeks is raising funds for Armello - Bringing Tabletop Adventures to Life on Kickstarter! A digital card and board game of heroes and high-adventure set in the fairy-tale animal kingdom of Armello!

Armello is a digital role-playing strategy board game developed by Australian independent game studio League of Geeks as their debut project. First announced as an iPad title in September 2012, the game has been in development since mid-2011, with music by composers Lisa Gerrard and Michael Allen. Between April and May 2014, a successful Kickstarter campaign was created to help fund a port to Steam and GOG.com, as well as stretch goals to bring the game to Android and Windows tablets. The game was also chosen to receive additional support from governmental funding agencies Screen Australia and Film Victoria.Set in a fantasy world filled with anthropomorphic animals, up to four players assume the role of a hero chosen among their clan to take part in a campaign to become the next king or queen.

The game features turn-based board-game mechanics that revolve around the use of dice and cards that are drawn from a deck, with each player's actions influencing the outcome.GameplayArmello is a digital simulation of a traditional fantasy tabletop role-playing game utilizing virtual dice and cards which allow the player to carry out specific actions. Up to four players assume the role of a Hero character that represents a specific animal clan, each with their own unique strengths, with the ultimate goal to storm the castle and become the new king or queen of the kingdom. The playing board area is divided into hexagon-shaped tiles that contain randomly generated features such as dungeons to explore, quests to complete, rival heroes to battle, or settlements to capture. As the game progresses, players can acquire currency to purchase additional abilities for their hero using a talent tree system specific to each character.The game uses a turn-based system where players are allowed to perform actions such as equip items and purchase talents during another player's turn to reduce downtime.

Cards and dice are used to directly interact with the game world, and form the basis for the game's combat system. Players use cards they draw from a deck to cast spells, recruit followers, heal wounds, or use items that grant special abilities. Cards may also be played as 'Perils' which can be laid on specific tiles to act as traps for other heroes or used immediately in combat, and other cards may be used to forge temporary alliances. Great little war game free.

Armello also features a day/night cycle where certain heroes gain advantages based on the time of day, and certain groups of enemies only appear in either the darkness or light. Plot and charactersThe game takes place in the 'dark fairy tale' Kingdom of Armello, a world filled with anthropomorphic animals separated into numerous clans. When the current king becomes corrupted by a dark force called the Rot, representatives from these faction rise up to embark on a journey to become the new king or queen in his stead.While the game features eight heroes available to all players at launch, more will be added to the game over time.

The balloon is between the log and some pine trees. Diddy kong racing t.t. door. You will get a turbo boost. After the announcer says 'Get Ready' and the words start to disappear at the start of a race, press the A button.

When it comes to designing a game, the folks at League of Geeks clearly know what they’re doing. Armello is smart stuff, shrewdly tuned, paced, and themed. An adorable little kingdom of animated animals is succumbing to evil purple rot (purple is always the color of evil in non-grim situations). Four heroes must scramble to fill the impending power vacuum, either fighting the rot or embracing it. What a great design!

But when it comes to implementing a game, hoo boy. What happened here? It’s rare to see such a smart game so poorly made.

After the jump, through a VaselineCam ™ darkly.

As a boardgame, this isn’t your standard issue run-around-and-pick-up-stuff design, mainly because the board is a fantastic example of a living world. It breathes with a day/night cycle. The alternating flow of gold and mana, one by day, the other by night, like the diastolic and systolic pulse of your income. Welcome a new spirit stone every morning and dread a new winged bane every evening. Some animals get a bonus by day, others by night. Time your attacks accordingly. The night wolves vs. the day rabbits.

The king, a regal cartoon lion sitting in a palace at the center of the map, is at once the game’s clock, boss, and gameplay tyrant. When he inevitably dies, the player with the highest prestige wins. That’s how he’s the clock. Many games of Armello just peter out with the king’s death. Make sure you’re in the lead at that point. But the lion is also the game’s boss in that if you can kill him, either in combat or by collecting four otherwise useless magical doo-dads, you’ll win. He’s also a tyrant in that every day he’ll announce a new decree, imposing some new gameplay condition on the board. Maybe his guards will hunt you down today. Maybe they’ll take away the villages that give gold to the players. Maybe everyone has to pay a gold tax directly. Maybe we’re all infected with rot. Maybe the king’s guards get weaker or the winged banes get stronger. If you’re the player with the most prestige, the king lets you pick which of two cards he’ll decree. It’s good to be the king. It’s better to be the guy with the most prestige who picks which card the king plays.

But as an implementation of a design, I have a few questions. Why can’t I pick which animals I want to play against when I’m playing the AI? Why can’t I modify the game conditions in any way? Why can’t I see the distribution of cards, which are integral to the gameplay? Why won’t you guys who made the game tell me what’s going on with that funky spinner when I explore a dungeon, particularly since my rabbit character is supposed to somehow enjoy an advantage with that spinner? Do you think I’m okay taking a character whose special power is “trust us, you’re gonna totally get some bonus here” while everyone else’s special power is specifically detailed?

Why is it so hard to get information in Armello? Why do I have to root around like a hog snuffling for truffles to get information about what special powers the other characters have, not to mention what special powers they’ve chosen in any given game? For instance, when I want to use a card you’ve given me that targets the player with the least gold, why do I have to click across four different screens to find out who that player is? Why have you made so much information so inconvenient to find? Why does the tab key display only pull up one single snippet of information when there’s so much room leftover? Why are tooltips so limited on the main game screen? Did you worry that it would distract from your artwork? Did you think the kinds of people who want to play an animated videogame/boardgame don’t care about information? Did you think we were here just for the cute rabbit and cuddly bear and sneaky rat, so we wouldn’t care which one did what?

Why is there an icon telling me I get a discount on trickery cards for owning additional settlements, but it doesn’t actually tell me how many settlements I own? Why isn’t the ingame documentation better? Why am I only allowed to draw a new quest when it’s no longer my turn? Why does it take so long between turns? Is stealth such a good idea when I could supposedly just remember where I saw a character move into a forest? Is that what I’m supposed to do? Why do I have to sit through so many animations? Why can’t I have more helpful information when it’s someone else’s turn? Why are some things only listed in the log but others get a nifty little popup on the right side of the screen? Do you really expect me to quickly play a card when it’s someone else’s turn? Why is the die rolling animation such a floaty mess, as if the dice were made of styrofoam?

Why are you timing me when it’s time to trade in cards for die rolls and at no other point in the game? Is there some sudden urgency here? Because isn’t that exactly the time I would want to carefully consider what my cards do so I know which onces to keep? Why am I so often locked out of checking information when I need that information to make a decision? I can choose to roll against a peril that will exile me to the nearest mountain, or I can burn cards to ensure I succeed — assuming I beat the timer! — but I can’t check the map to see where the nearest mountain is? Isn’t this supposed to be a boardgame?

Given the modest size of this kingdom, why can’t I see all of the map at once? Isn’t this supposed to be a boardgame? This is what drives me nuts more than anything else. Armello should be a modest sized game, easy to wrap your brain around at a glance. Nowhere is that undermined more than on the main map, an indeterminate heap of graphics with no thought given to making them readable or placing them in a larger context, or relating one section to another. I can tap hotkeys to bop around the map willy nilly, but I can’t get an overview to relate these bits of information to each other. When I try to get an overview of the game, of the characters, of the overall situation, at every turn, Armello denies me. Why are there clouds and smeary Vaseline effects in my way when I zoom out? For Pete’s sake, League of Geeks, why do you think I’m zooming out in the first place? I’m zooming out to see more of the map, but your pointless clouds and smeariness mean I’m actually seeing less of the map. Who’s running the show over there, your cloud artist?

In fact, here’s a screenshot when I didn’t even zoom out. As you can see, the forecast is for cloudy with a chance of not knowing what the hell is going on. 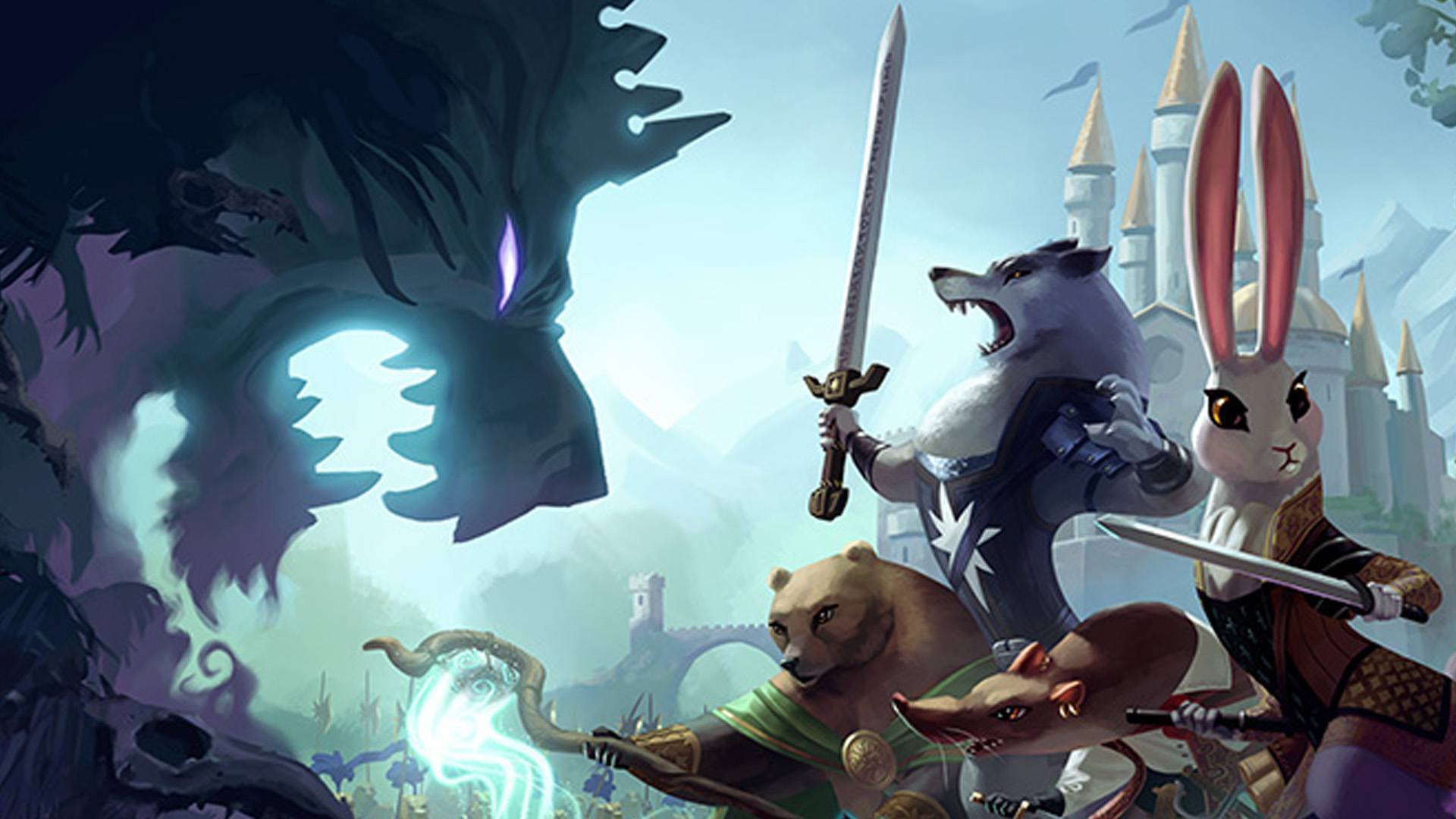 I realize Armello deserves more than the standard-issue rabble-rousing snarky takedown. That’s truly not my intent. I admire what League of Geeks has attempted because I’m their target audience. But it’s deeply frustrating to peer down through this smear of bad decisions at a design I really want to play. This should be a great fifteen-minute adventure. It has the necessary components: smart interlocking gameplay systems, snappy pacing, adorable artwork and animation, a truly imaginative setting. But it’s not a fifteen minute adventure. It’s an hour-long interface nightmare. Armello, which would be a great boardgame, is a terrible videogame.