The Royal Tenenbaums is a 2001 American comedy-drama film directed by Wes Anderson and co-written with Owen Wilson.The film stars Danny Glover, Gene Hackman, Anjelica Huston, Bill Murray, Gwyneth Paltrow, Ben Stiller, Luke Wilson, and Owen Wilson.Ostensibly based on a non-existent novel, and told with a narrative influenced by the literature of J.D. Salinger, the story follows the lives of.

I loved this film. The Tenenbaum's dysfunction (while amplified for the screen) is quite an accurate portrayal of family life. Families are, essentially, groups of people living in each other's pockets, and, invariably, those people who love you and hate you the most. Dunk hit play online. Don't get me wrong, Royal and his (thermo)nuclear family of brilliant buffoons do not represent my family (or any other in the world I think!) but the family united against a miscreant father is a motif a lot of people can understand.

It is this common humanity that really appeals to me as a film watcher, and what, ultimately made this film so very memorable to me. The ensemble cast is astonishingly proficient. They all lend a perfect quirkiness to the roles. Anjelica Houston is the perfect former Mrs Royal Tenenbaum, down to the smallest nuance, Ben Stiller and Luke Wilson turn in wonderful performances, and this is the only role I've seen Gwenyth Paltrow in where I actually thought she was someone other than Gwenyth Paltrow (this is not an insult, it's just that people don't always do it for everyone, you know.?). Bill Murray, Gene Hackman, Owen Wilson, all excellent, all the time. The black comedy counterbalanced with the drama of the issues raised in this film left me feeling like I'd witnessed a film event, rather than just another film. I loved every frame of it, from the Baldwin narrated opening, to the final tying up of ends.

It never dwelled on melodrama, or the more potentially unsavoury elements, and it didn't sink into the schmaltzy 'We all love each other' end it could well have. It began perfectly, and it ended perfectly. 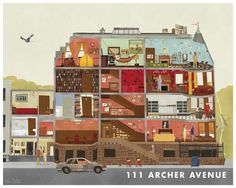 I can't recommend this movie more highly. It's a must see for anyone who loves quirky and emotive storytelling, great characters and beautiful dialogue.