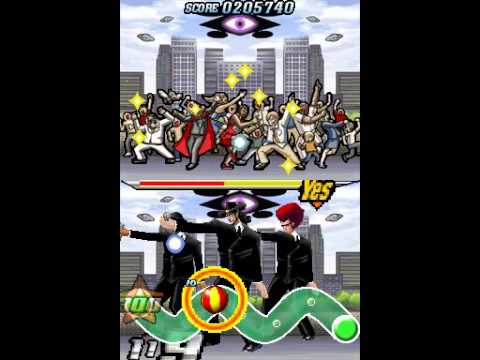 Once you start, you'll need to call on the Ouendan to help you stop playing this game.

There's something special about Ouendan and its western spinoff, Elite Beat

Agents. It's not just that the fast-paced screen-tapping can't be replicated

on any other system, or the great music and brilliant art contained within.

It's the whole wonderful, upbeat, and wacky theme of cheering for people.

There's nothing else quite like it, and it has a really amazing effect of

Like in the previous Ouendan, the goal is to cheer along with the music by

tapping circular marks along with the rhythm. Some basic new features

directly on the song selection map, saving replays of your performances,

being able to quickly skip song intros, and little perks like that. You can

(they'll be needing their own copies of the game, y'know).

Once again, the story follows the Ouendan we know and love as they help

people out of tough situations, but it seems like a rival Ouendan group has

moved into town. The stages are divided between them until the final stages.

And then something interesting happens.. no spoilers here, but here's a

hint: Ouendan has to save the world, again! As it's an import game, all of

the text is in Japanese, but the language barrier is a huge non-issue. The

game is simple enough to understand, and many people consider the

all-Japanese interface part of its appeal. It seems like a couple of the

Ouendan has been one of the best games on the DS since it came out, and

Ouendan 2 is a worthy sequel. There aren't any radical changes, just a

bigger, nicer version with 19 new songs. Owning at least one of the Ouendan

Manga-like scenes play out on the top screen, while the polygonal Ouendan crew cheers on the bottom. It's sharp, colorful, and altogether a pretty slick presentation.

Some of the 19 songs are actually originals rather than covers. They all sound great, but maybe a little bit lossy from compression, if anything.

Touching is good. Yeah, I'd like to see somebody try to keep up with tagging marks this fast and precisely with a mouse or light gun. A larger, pen-sized stylus is recommended more than an original DS stylus for maximum comfort.

It's an inspired concept, and it's fun and addictive. There's a bit of a problem on getting stuck on certain songs for a while, though; the difficulty can ramp up a fair bit between songs.

Unless you can S-rank everything in a week like some kind of Youtube superstar, you'll be playing this for quite a while.

This is a fantastic game, and comes highly recommended for purchase. It's easy to understand, especially for an import, and it's incredibly fun.

There are some odd factual errors, but other than that it's a nice review.
(All the songs are covers, if I'm not mistaken, and there were 19 songs in EBA, etc)
Also, are you sure there's no single-cart multiplayer? EBA had a limited single-cart mode, but with the Japanese menus I can't quite tell.

EBA does in fact have 19 songs. According to wikipedia.com, but by no means fact, four of the songs in Ouendan 2 are original versions.
I am curious as to single-cart multiplayer on OTO2. I think one player just sets up a game (as normal) and then the other has to go to DS download play, wherein the host game and DS will detect it and send out, though I'm not sure.

Hmm, that's interesting. There was one original song in the first Ouendan, so it's not unheard of. Shame I can't read Japanese, or I'd simply check the game's credits.

Oops, I must have miscounted. @_@ I'll fix that up right away

I changed the part about the covers vs. originals. You don't need to read Japanese to see that the credits have both the original and cover artists names. In several cases the same names are listed for both.

This game gets a 6 for not having Hulk Bryman! in the werewolf stage

this game is so amazing. i got it as well. just beat it on 'hard'.
i have to say. i agree. this is by far much deeper and more enjoyable (and harder) than the first game. plus, the 'being about to skip everything' thing is my favourite part. i didnt even finish the first game simply because i couldn't retry instantly at the end.

Add to the discussion!
DS