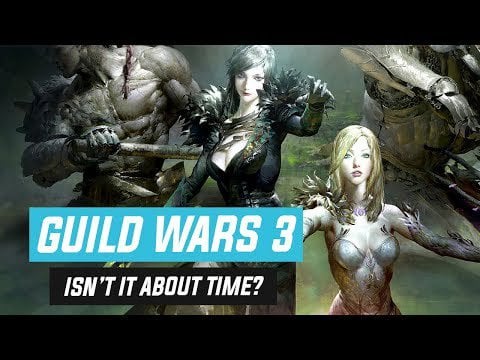 Honestly, I want the GW franchise to spread into different game styles. Let GW2 be the Guild Wars MMORPG. Let GW1 be the Guild Wars COORPG.But create a single-player offline GW game. Maybe one that can connect online optionally - like Diablo 2 was - rather than required. There's a lot of potential stories to be had in a single-player game as it offers allowing players to be famous characters, or their own.I'm thinking something in line with Dragon Age in terms of mechanics, with its story based in Tyria's past, particularly a subject not much effort has been put in - allowing the development of this 'Guild Wars 3' to not hinder GW2 allowing both to grow.As a single-player game, balance wouldn't be as important, and ArenaNet could even allow player modding if they wanted - something I know many players would enjoy. I'd like to see them return to strong story and lore and let go of the concept of every decision matters, at least as they currently implement it. The way they currently try to implement choices ends up with tons of frivolous side plots that don't go anywhere and that ultimately don't matter to the story.

Guild wars 3: immortal is coming out on all iPhone and android (mobile) devices. With more gem store items that you can imagine and since most people enjoy the open world spam your autos mindset. It will even play the game for you, while you go watch Netflix. Enter the world of Guild Wars, a competitive online role-playing game that rewards player skill. In large head-to-head guild battles, cooperative group combat, and single-player missions, you'll.

I am totally okay with a linear story as long as the story is told well. Oh, and an actual final boss fight. None of this fighting off minions while we power up the dragon-killing laser.More interesting endgame content. Nothing in GW2 came close to being as fun and interesting as adventures into the Underworld or the Fissure of Woe did.Split the difference in the number of skill options from GW1 and GW2. I get that GW1 became a nightmare to balance, but I've always missed how much customization and variability there was, and I always felt locked in to playing or avoiding specific weapon sets in GW2 because they weren't interesting to play.Overall, I'd like them to devote more resources to a smaller scale than they went for with GW2. Everything felt half-polished, like they were stretched too thin.edit: I will say that there are definitely parts of GW2 that I would like to see return. I think the concepts of dynamic events and everybody gets credit were very well implemented.

At times they just suffered from other issues. I get that GW1 became a nightmare to balance, but I've always missed how much customization and variability there wasSo much this. I can say pretty confidently that one of GW2's huge turn-offs for me is the skill bar.

HEAVE HO CRANE Service. Commercial & Industrial Equipment Supplier. Heave ho crane. Save on your next lift with affordable Heave Ho Crane Co. We offer low rates on our crane trucks for customers from throughout the Houston area. Get directions, reviews and information for Heave Ho Crane Service in Lafayette, LA. Heave Ho Crane Service 2127 Robley Dr Lafayette LA 70503. Reviews (337) 706-7219. Menu & Reservations Make Reservations. Order Online Tickets Tickets See Availability Directions. At Heave Ho Crane Co.®, we maintain extensive and highly rated insurance, and we have an impeccable safety record. Each unit in our fleet is operated by a certified, safe, expert, reliable operator. All operators have been with the company for more than 12 years.

Sky burger background pictures. I feel so incredibly limited in terms of what I can do compared to what was available in GW1.To me, making a game with GW1 skill/skill bar mechanics and GW2's 'active' combat and World Events would be amazing. I liked the concept of secondary professions, but I don't miss those too much in GW2.

If they could be brought back without completely breaking the game, I'd enjoy it, but it isn't necessarily a 'must' for me. A completely different development team than the one that currently exists at Arenanet.A small studio. One that absolutely loves Guild Wars lore and wants to stick to it by expanding, not overwriting. A studio that doesn't want yet another run of the mill MMO, and is completely ok with relying on other genres (like hack n slash/ARPG) to fulfill the niche Guild Wars did. You know, a studio that isn't going to promise the world and more in being a revolutionary MMO, but instead pulls many solid ideas together to create a complete and fulfilling package.Oh, and great expansions. Really expansive ones that make you feel as if you're actually exploring the world through the story, not ticking off yet another box in map view. Also really great PvP, and having balancing be completely separate from the other areas of the game. No focus on esports, but support for the community do accomplish what they want (ie, implementing spectating so the community can cast games/watch games).