Champions Online is a free-to-play (with optional subscription) superhero-themed massively multiplayer online role-playing game by former City of Heroes/Villains developer Cryptic Studios based on the Champions license. The game's rules and setting are loosely based on the HERO System ruleset.[3] The game has been released for Microsoft Windows. An Xbox 360 version of the game was in development, but canceled in March 2010.[4]

What are teams voting on? The 42 teams in the top four divisions of Scottish football were asked to vote on whether they wanted the season concluded early, rather than wait out for the chance to.

The game is more action-oriented than most MMOs. Successful attacks and blocks increase a power meter which can then be spent to unleash more powerful actions. Death is handled in a similar manner to City of Heroes, in which a player may choose to be revived by a teammate or respawn at a neutral site, except respawning does not accrue experience debt. Instead, upon death the player loses one of the five possible accrued Hero Stars. These stars are earned for staying alive while defeating NPCs. Heroes and villains from the Champions universe serve as major NPCs. The character gains bonuses to their effectiveness for every star earned (percentage increases to damage, healing, etc.).[3]

Unlike most MMOs, there are no armor pieces or armor sets to collect. Instead character dress is purely unique and cosmetic, as are most weapons - damage is calculated using the character's basic stats, with the addition of extra devices. Reflecting the game's original design as a console game, characters also possess much fewer skills than standard MMOs; however each skill can be highly customized with a variety of player-chosen 'Advantages'. This tends to make the game much faster-paced and less of a 'grind' than traditional MMOs. The level cap is 40, with special endgame content and gameplay at the cap.[5]

The game features an 'orb system' where enemies defeated by the player may drop orbs that temporarily benefit the hero's powers, life, or energy.

The action takes place in the Champions universe, featuring Champions characters as NPCs. Regions include urban sprawls, dinosaur-infested islands, underground ruins, and underwater lairs. Each region in the game is composed of several 'instances' with up to 35 players per instance at any one time. This allows the game to run on one huge virtual server, and for players to travel freely between instances to join with other players, rather than the game being sharded into different servers. Many missions take place within smaller instances created specially for a team entering them. These instances are reset if the player leaves and return. It is possible to revisit the same region to redo some missions again and again.

A special region called 'the underground circuit' allows player vs. player competition.[5] Also, Stronghold, the setting's advanced prison for super-powered inmates, is used for player vs. player scenarios, in which the player will take on the role of a supervillain trying to break out or a superhero trying to contain them.

The game features a character creation similar to City of Heroes, with additions such as the ability to edit a hero's movement animations, such as a beast-like hero opting to run and leap on all fours.[5] The player may also edit the color and firing position of their powers, such as changing a power's energy animation from red to green or changing the animation to fire from the head instead of the palms.[7]

Another difference from City of Heroes was the original elimination of any character class or archetype system; characters can take any skill or power.[8] However, since the launch of the 'Free for All' version of the game, freeform character creation was limited to Gold members, and several archetypes were introduced for both Gold (subscriber) members and Silver (free to play) members. The game also supports solo play throughout a hero's career if desired.[5]

There are currently eleven archetypes available free to all members, and an additional bonus one unlockable as a reward for reaching the level cap for the first time with any character. The game also has a variety of premium archetypes with the same number of powers as the free ones, but these can be purchased via the game store. Some of the premium archetypes can be unlocked for free by participating in different events of the game by earning event currency during different times of the year such as Halloween or Christmas.

At level 25, players are able to create their own custom Nemesis along with his or her minions using the same character creation system used to make their hero, with added selections specifically for the Nemesis. The Nemesis' minions will then ambush the player's hero, providing clues and information leading to Nemesis missions and eventually a showdown with the player's Nemesis. After the player character defeats their nemesis they put them in jail and are allowed to make more nemeses until they reach the limit which is currently 18 nemeses.

The game's announcement followed the cancellation of Cryptic's Marvel Universe Online as well as the sale of their Intellectual Properties City of Heroes and City of Villains to developer and publisher NCsoft in November 2007.[9] On February 28, 2008, Cryptic announced they had purchased the entire Championsintellectual property, licensing the rights to publish the 6th edition back to former owner Hero Games. The 6th edition books will synergistically allow players to adapt their Champions Online characters to the pen-and-paper roleplaying game.[10]

On July 10, 2008, 2K Games announced they would be publishing the game.[11] Registration for the closed beta testing period was announced on October 10, 2008.[12] However, on December 17, 2008, 2K Games officially dropped the publishing of the game due to the take over of Cryptic by Atari. Atari then developed and published the game along with the ongoing development of Star Trek Online.

Release was originally set for July 14,[13] but on May 16, 2009, Cryptic announced that Champions Online would be delayed and the game was officially released September 1. Executive producer and design director Bill Roper cited that the team needed more time to implement important features that the beta test group felt were necessary at launch.[2]

As announced by Cryptic in July, 2009, the game includes Micro-Transaction purchases. Most items available for purchase are vanity items that do not affect gameplay, such as costume pieces and ingame action figures. Any items that do affect gameplay are also accessible through gameplay only. All items purchased are available to all characters on the account.[14]

On July 20, 2009, a post on the official Champions Online Discussion Forum from a Cryptic online community representative addressed the lack of any announcements regarding plans to release Champions Online on Xbox 360. It stated that 'it has always been, and still remains our intent to release on consoles, and as soon as we're able to share more information about it, we will', and alluded to unfinalized business deals with other, unspecified companies which prohibited the disclosure of more specific details. The community rep's post also noted that the Xbox 360 FAQ had been removed from the Champions Online website.[15] In a podcast interview for the gaming website vg247.com dated August 28, 2009, Jack Emmert elaborated on the issue, stating that the Xbox 360 version is 'ready to go' but is facing an indefinite delay while awaiting Microsoft's approval, which is not readily forthcoming due to Microsoft's indecision on how to implement MMO's across Xbox Live.[16]

On August 17, 2009, Cryptic opened up their Beta servers for access through August 25 to allow the community to test and trial the system as well as submit bug reports, and the game officially launched September 1, 2009. Those who pre-ordered the game gained instant access to the Open Beta on August 17, and some of those who pre-ordered (depending on their retailer) also gained access to an 'Early Start' on the live servers beginning on August 28.

For this week's mod author interview, we're joined by Lo2k, who has been a member of our community since 2006 and is the author of over 50 different mods for No Man's Sky. Thank you for joining us Lo2k. To start off, can you tell us a little bit about yourself? Thanks for inviting me for this interview on Nexus Mods. Project Zomboid (BETA) Spiffo's Workshop Welcome to Spiffo's Workshop, the place to find Project Zomboid mods, maps, buildings and other things to tinker with. Now Project Zomboid now has the run of the Steam Workshop, we’re talking to the modders filling it to the brim with survival joy. Last time. 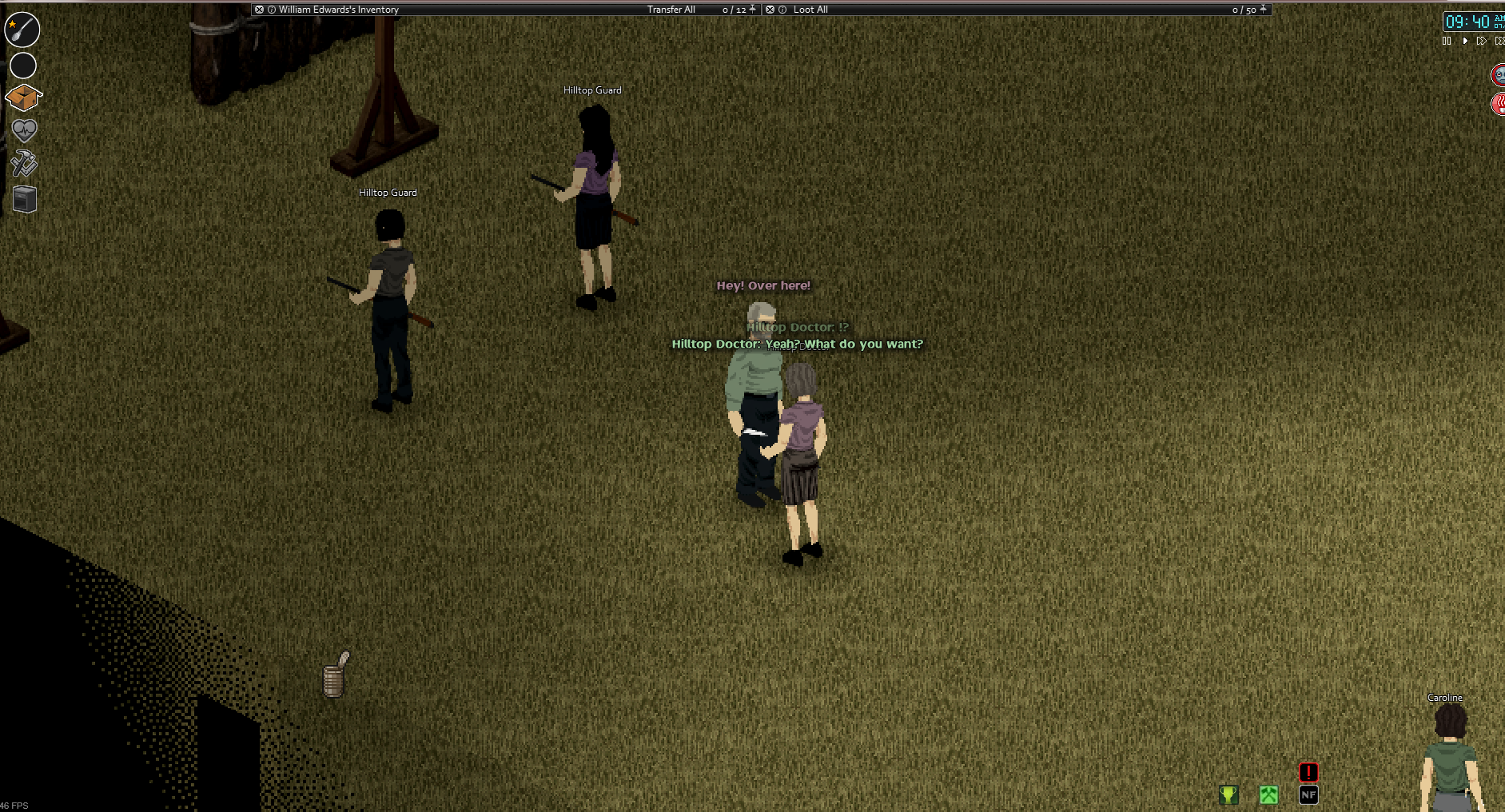 On September 1, 2009, Champions Online became available for purchase instores as well as shipped out from online stores. Pre-Order players were given until September 4 to enter their new product key to continue playing. The purchase included one free month of play and a special item specific to the retailer.

The game was originally available to paid subscribers only, but moved to the Free-to-play model on January 25, 2011.[17]

The game uses a new game engine developed by Cryptic Studios for use in all of their new MMO projects. The characters feature a special cel-shading Cryptic Studios refers to as comic shading, which includes bump mapping and high-resolution texture mapping.[18] Hero facial animation will be stressed as well, allowing them to show emotion.[19]